DVDs In the Christmas spirit... 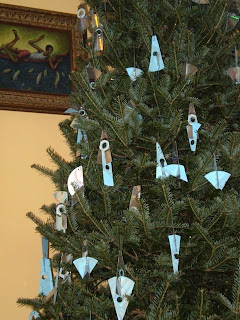 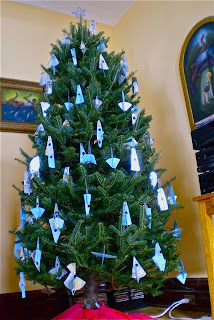 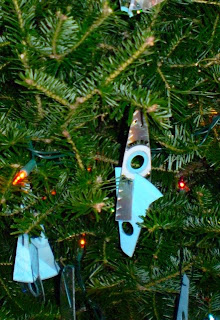 "The Result of It was Hurt.." Returning the Archbishop's DVDs 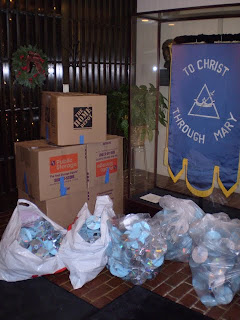 The offical press was kept outside the Chancery door but word can still get out now that "we are the press" thanks to the web. Francesca made this great little home movie of the return of thousands of DVDs by returnthedvd.org and myself. Approx. 4,000 DVDs were returned to the Chancery today... while the archbishop wouldn't meet with us, we were able to have an interesting exchange with his representatives. 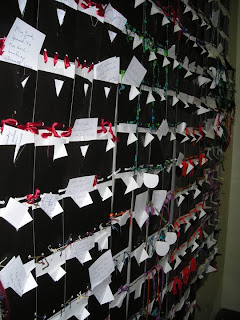 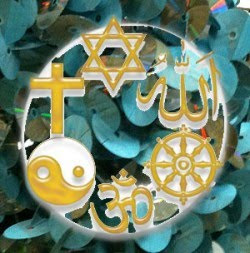 Religions of the World over Lucinda Naylor's "Wave"
Photo from KFAI website.
Truth to Tell is the name of a radio show hosted by Andy Driscoll and Lynnell Mickelsen on KFAI FM 90.3/106.7/Online @KFAI.org.
Today I joined Fr. Michael Tegeder and Rev. Leeanne Watkins Monday morning to be part of a conversation "about the role religion plays in uniting or dividing us, with an emphasis on... Catholic and Episcopalian faiths’ responses to the reality of same-sex relationships...(and) the roles churches... play in mixing their spiritual missions with... secular politics."
The Archdiocese of St. Paul & Minneapolis was invited to participate but "(Dennis McGrath) stated that they do not participate in such discussions, unless there's a theological conference or something of similar gravity involved". Not unexpected but disappointing.
Click here to go to a linked article: audio file available for download at the bottom of that page.
Posted by DVD to ART at 7:33 PM No comments:

A constant refrain in the Bible, from Isaiah to Luke, is "Be not afraid".
The latest kerfuffle springing from the archbishop’s DVD is the censoring of editorials in the Benilde-St. Margaret's High School newspaper the Knight Errant. I was interviewed by a student reporter for a story titled “Church releases DVD that makes waves”. Published alongside this article were two editorials: “Staff finds DVD unsubstantiated” and “Life as a gay teenager” (also reprinted as “For gay teens who have considered suicide”).

The censoring of these very worthy editorials was done by the school, as MPR reports: “Dennis McGrath, a spokesman for the archbishop of St. Paul and Minneapolis said, 'We were not involved in this process, but we are supportive of the decision by school authorities.'"

Funny, those were almost his exact words about my suspension from the Basilica. We didn’t do it, but we support those who did.

As a friend who works for the Church said to me, “when you create a climate of fear, you don’t have to do your own dirty work”.

The Knight Errant student editors did an excellent job of scrutinizing the claims on the DVD. For example, in dealing with one of the most offensive falsehoods, the editors wrote:

The DVD also aimed to reject the notion that the issue of gay marriage is an issue of civil rights. They did this in the most subtle way imaginable: by having a black man quote Martin Luther King Jr. The quote in question was from “Letter from Birmingham Jail,” and stated that for a law to be just it must be in line with natural law.

What the speaker fails to address is the very next line of the letter that states, “Any law that degrades human personality is unjust. All segregation statues are unjust because segregation distorts the soul.” Clearly this omitted line proves that MLK would not have supported discriminatory policies against any group, including homosexuals. The fact that the Church would go as far as to evoke MLK in an issue, which he clearly wouldn’t have supported, speaks volumes to the argument which the DVD presents.

Coretta Scott King--who should know best-- has been quoted as saying MLK would support gay rights. She stated: "Gay and lesbian people have families, and their families should have legal protection, whether by marriage or civil union. A constitutional amendment banning same-sex marriages is a form of gay bashing and it would do nothing at all to protect traditional marriage." I think it is safe to say these students’ claims are on very firm ground.

But dissent, even when speaking the truth, is no longer tolerated in today’s Catholic Church. The student reporter told me that while students wanted to talk about the DVDs, the school staff was very afraid and wouldn't speak openly. They rightly feared for their jobs if they dissented.

Since I was suspended, multiple people have contacted me to say they (too) lost jobs with the Church through direct interference or indirect fear of the archbishop. For a variety of reasons, these people have mostly chosen to go quietly--but with very heavy hearts.

The DVD to ART opening took place in a space surrounded by large plate glass windows. A number of people who worked for the Church risked attending. A friend, who knew some of these folks, was startled by how paranoid they were. Some of them asked him to patrol the street to make sure no one was photographing them entering or leaving the exhibit. They were afraid of being spotted and reported. But they are the brave ones... I give them credit for showing up, because their fears are legitimate. 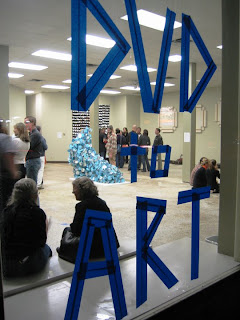 No Church employees are present in this photograph.

At the start of the project, when I was collecting DVDs outside the Basilica, a woman I’d never met before came to drop off her DVD. Since there was press around, she shielded her face with her hands and the DVD, so she wouldn’t accidently get caught in a photo. “My husband works for the Church,” she sheepishly explained.

The Church of not that many years ago was talked about as a big umbrella, where family--who didn’t always agree--sheltered together. Now instead of hearing “all are welcome”, we instead hear talk of “a smaller and purer Church”. Our own archbishop responds to letters by suggesting dissenters might be happier in other faith traditions--as well as questioning their salvation.

Over and over lately, I find myself saying, “you know something’s wrong when the Church is ruling with fear instead of guiding with love”.

I applaud the student newspaper staff at the Knight Errant who dared to speak out. When I was their age I was proud to be Catholic because I knew my Church let me think for myself and ask big questions. I didn’t see the point of having a faith that was so limiting that it couldn’t withstand dissent. A God constrained by that kind of faith felt too small for me then, and still does.

I hope we can return to days when we were proud to say "catholic means universal"--and felt it held true not just for the "little c" catholic of the creed but for the "big C" Catholic of the Roman Catholic Church. Over-quoted, but true: "we are the Church" and "we need to be the change we want to see".

"Fear not, for I have redeemed you; I have called you by name: you are mine."

(Words in blue-gray are live links.) 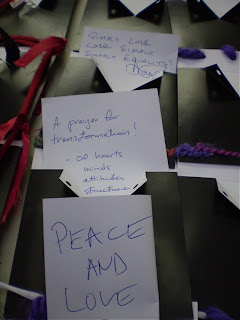 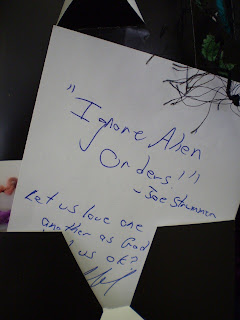 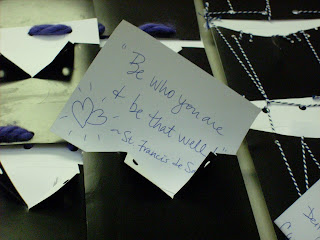 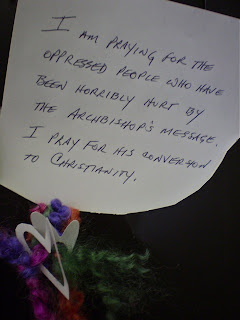 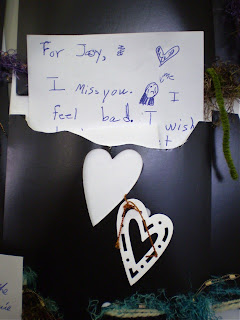 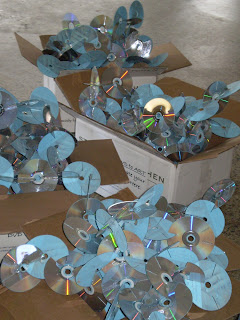 My porch is flooded... 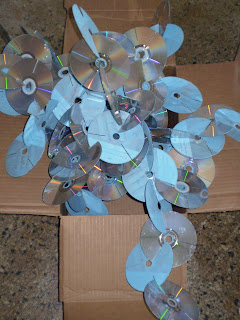 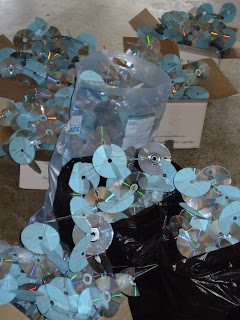 now waiting to be turned into smaller waves...
Posted by DVD to ART at 8:58 PM No comments:

DVD to ART is a project by Lucinda Naylor,

in collaboration with Catholics who received DVDs

from the archbishop urging them to oppose

same-sex marriage. In the spirit of “art changes

everything”, Lucinda collected these DVDs

to transform them into art. Please check out the blog

history and links to follow the progress and history

Following its brief life in a make-shift gallery,

I have turned The Wave into smaller sculptures.

Some of these will be offered for sale, others will be

archbishop along with DVDs collected by Return the DVD.

The Wailing Wall Quilt--made from DVD sleeves and notes

from the community--will be on display at

DVD to ART
This blog is administered by Lucinda Naylor (the artist) and Maura Lynch (the patron saint of doing what needs to be done) to promote the art project DVD to ART.